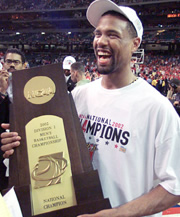 Byron Mouton, former captain of the 2002 University of Maryland National Champion team and the founder of 6th Man Sports, one the fastest growing youth basketball organizations in the country. Byron, a 6'6 swingman from Rayne, Louisiana, High School State Champion, AAU All American transferred from Tulane University where he was the teams leading scorer, to University of Maryland where he lead the Maryland Terrapins to their first National Championship in the history of the University.

Byron also assist in executing sports programs with the Montgomery Sports Association (MSA). MSA have one of the largest youth after school sports programs in Montgomery County which includes basketball, baseball, soccer, football and tennis. The programs are community based and are designed for kids that love sports and want to learn the fundamentals of all sports.